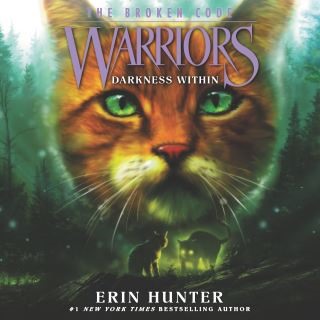 Warriors: The Broken Code #4: Darkness Within

Exiled after a battle that left all five Clans devastated, ThunderClan’s loyal deputy, Squirrelflight, must bring to light an earth-shattering truth: the identity of the cat ruling ThunderClan while wearing Bramblestar’s face.

While the fate of his body hangs in the balance, the real Bramblestar’s spirit has vanished. Even Rootspring is powerless to reach him—and with tensions among the Clans at a breaking point, Squirrelflight may not be able to ensure Bramblestar has a body to return to. If he returns at all.

Packed with action and intrigue, this sixth Warriors series is the perfect introduction for readers new to the Warriors world, while dedicated fans will be thrilled to discover the new adventures that unfold after the events of A Vision of Shadows.

Erin Hunter is inspired by a love of cats and a fascination with the ferocity of the natural world. In addition to having great respect for nature in all its forms, Erin enjoys creating rich mythical explanations for animal behavior. She is also the author of the Seekers, Survivors, and Bravelands series.